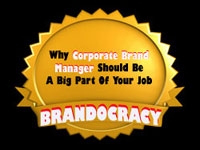 Surprisingly, there is no defined background or career path for those who aspire to the position of global corporate brand manager. Public relations and corporate communications practitioners often believe they have the right to be the strongest voice in determining the brand. After all,among the responsibilities of the most senior public relations (PR) executive is that of promoting and protecting the reputation of the corporation.

But at a time when global brands are valued in the billions, there is a dearth of good practical advice on what business professionals from many areas could and should be doing to build and protect their organization’s brand. And everyone from designers to lawyers to marketers to advertisers and even HR professionals can and should be playing a role. Nothing is more important than living the brand.

This webinar offers a chance to hear Michael Morley discuss themes from his new book, The Global Corporate Brand Book. He will show how corporate brand value can be measured in finite terms and encourages PR people to aspire to the role of corporate brand managers. This way their own work’s importance will be recognized and funded. But before this can be achieved, they will need to widen their knowledge beyond traditional PR techniques.

“Presenter was extremely knowledgeable, presented well and used some excellent examples. He dug far deeper into branding and reputation management than I have ever seen or heard. His laying out of the six Vs was creative, sensitive and well done.”

Michael Morley is president of Morley Corporate Consulting, a firm of management consultants in corporate reputation and branding. For nearly 40 years Morley worked at Edelman helping establish it as the world’s largest independent PR agency. He founded the agency’s first overseas office, in London in 1967. He went on to be named President of Edelman International Corporation and established other Edelman offices in Europe, Canada , Asia Pacific and Latin America . Since 1984 he has been based in New York.

Morley has managed multi-national PR programs for companies that include UPS, AMADEUS Global Travel Distribution, NCR, VISA International, British Airways, Ernst & Young, Hoffmann-La Roche, Schering Plough, Procter & Gamble , S.C. Johnson and Hertz Corporation. From 1995 to 1998 Morley was President of Edelman New York and from 1998-2001 was Deputy Chairman and President of International Operations. He served as Deputy Chairman of Daniel J. Edelman Inc until his retirement in 2006.

He is also Chair of the Senior Advisory Board Experts (SAGEs) of the Echo Research Group and adjunct professor teaching in the Master of Science in PR and Corporate Communications program at New York University.

Before joining Edelman, Morley had served as an officer in the Royal Artillery and after a period in journalism had been a director of another British PR firm for seven years. He is a Fellow of the Chartered Institute of Public Relations, lectures extensively on PR, holds the CAM Diploma and in 1981 was elected to a Fellowship in the organization that is responsible for P.R. education and examinations in Britain . He served as Chairman of the jury of the IPRA Golden World Awards from 1999-2002. In June 2003 Morley was awarded the Alan Campbell-Johnson Medal for distinguished service to International Public Relations by The Institute of Public Relations. Later the same year he was one of the first six PR leaders named to the ICCO Hall of Fame.

Beyond Buzz: How to Deliver Meaningful Business Results Through Public Relations
PR / Media Relations   Measurement / ROI
Communicators have been using PR to deliver value for decades. What’s new is that a handfu...

Common Ground: How To Form Alliances With Advocacy Groups And Build Your Brand
Marketing   PR / Media Relations
In this age of rapid communication, openness and transparency, it becomes more important than ev...

Getting to the heart of Social Responsibility: Is it about Goodness or Business?
Marketing
Despite a steady stream of corporate-caused financial, social and environmental disasters, the d...

Glass Houses: How To Safeguard And Restore Your Corporate Reputation In A Rock-Throwing World
Leadership   PR / Media Relations   Marketing
We all live in glass houses. Reputation failure is no longer a threat that looms large for compa...

How Sprint trains and empowers employees to be social brand ambassadors
Internal Communications   Marketing
We are living in an era where social media not only impacts the way human beings interact with o...

How to empower your employees to be social brand ambassadors
Internal Communications   Marketing
When it comes to humanizing your brand in social media, nobody can do it better than your employ...

How To Make Your Executive Communications Program Really Strategic
Leadership   Marketing
Potentially, executive communications is the most powerful PR tool your organization has. In rea...

How to move an audience to action - mastering the art of persuasion
Marketing   Communication Skills
Get instant access to this webinar replay. Or Subscribe to ASK and access all replays (best value...

How to Prove -- and Improve-- the Value of Public Relations
PR / Media Relations   Measurement / ROI
Proving the value of public relations continues to be one of the profession’s most vexing challe...

Mobilizing Employees For a Cause, McKesson Case Study
Internal Communications   Marketing
Employee Engagement: Mobilizing For a Cause Laura Rodormer, Director of Corporate Citizenship, ...

Protecting Your Reputation When All Hell Breaks Loose
Marketing   Crisis
This session will identify and describe the actions companies and their leaders can take to safe...
Showing 1 - 20 of 31 results
«12»