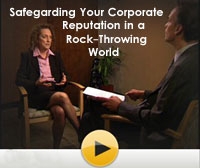 Why you should purchase:

Media coverage of reputation alone has increased 108 percent over the past five years. Reputation management is now considered a legitimate body of knowledge, with a number of emerging new disciplines, including reputation recovery. Also, the sheer number and severity of corporate falls from grace in the last few years — coupled with the emergence of revolutionary ways of transmitting information, influential micro-constituencies and widespread mistrust of business — have magnified the need for a viable framework for the repair and recovery of damaged company reputations.

Before joining Weber Shandwick, Dr. Gaines-Ross was Chief Knowledge & Research Officer Worldwide at Burson-Marsteller and Marketing & Communications Director at Fortune. At Fortune, she initiated several groundbreaking research programs including “Leveraging Corporate Equity” and “Brands at the Crossroads.” She is also widely recognized for her strategic insights into and analysis of Fortune’s Most Admired Companies Survey. Dr. Gaines-Ross was a 1995 winner of Time Inc.’s President’s Award. She is also the co-author of FORTUNE Cookies: Management Wit and Wisdom, which was published by Vintage Books.

Dr. Gaines-Ross’ work has been featured in the Financial Times, The Times (London), The Wall Street Journal, The New York Times, The Economist, Fortune, BusinessWeek, Wired, Advertising Age, PRWeek, Forbes, The Christian Science Monitor, USA Today, Chief Executive, Business 2.0, Across the Board and in many other publications around the world. She has also appeared on CNN and CNBC.

Dr. Gaines-Ross is a frequent public speaker on CEO and corporate reputation management. She has lectured at The Anderson Graduate School of Management at UCLA, USC, Wharton School of Business, New York University and Columbia University. Dr. Gaines-Ross was also a speaker at the 2003 World Economic Forum Governor’s Meeting. She is a member of Ethical Corporation’s Advisory Board, serves on the Executive Advisory Panel of Corporate Reputation Review and was inducted into the Academy of Women Achievers of the YWCA of the City of New York. Dr. Gaines-Ross has been named one of the “100 Most Influential People in Business Ethics for 2007” by Ethisphere Magazine.

Common Ground: How To Form Alliances With Advocacy Groups And Build Your Brand
Marketing   PR / Media Relations
In this age of rapid communication, openness and transparency, it becomes more important than ev...

BRANDOCRACY: Why Corporate Brand Management Should Be Part Of Your Job
Marketing   PR / Media Relations
Surprisingly, there is no defined background or career path for those who aspire to the position...

The Mirror Test: A New Way To Look At Your Company's Marketing and Sales Strategy
Marketing
Hailed a “Celebrity CMO” by Forbes Magazine, and famous for his outspoken appearance...

How to Prove -- and Improve-- the Value of Public Relations
PR / Media Relations   Measurement / ROI
Proving the value of public relations continues to be one of the profession’s most vexing challe...

Beyond Buzz: How to Deliver Meaningful Business Results Through Public Relations
PR / Media Relations   Measurement / ROI
Communicators have been using PR to deliver value for decades. What’s new is that a handfu...

Social Media And Investor Relations #1: How To Talk Financials And Not Break Any Rules
PR / Media Relations   Social Media
Get instant access to this webinar replay. Or Subscribe to ASK and access all replays (best value...

Social Media And Investor Relations #2: Tips On Using The Newest Tools In Financial Communication
Social Media   PR / Media Relations
On the surface, it would seem social media is at odds with investor relations.  The new media ch...

Back to Face to Face: How to Re-ignite Your Manager Communication Program - Roger D'Aprix
Internal Communications   Leadership
Ok, if we professional communicators would all come clean, we would admit we’ve been paying a lo...

How Sprint trains and empowers employees to be social brand ambassadors
Internal Communications   Marketing
We are living in an era where social media not only impacts the way human beings interact with o...

How to empower your employees to be social brand ambassadors
Internal Communications   Marketing
When it comes to humanizing your brand in social media, nobody can do it better than your employ...

The ABC’s of TV Interviews: Readying Your Boss, Clients and Colleagues for their TV Close-Up
Communication Skills   PR / Media Relations
Have you ever watched your client on television and thought: “Oh, my! Look at how many chins he ...

How To Make Your Executive Communications Program Really Strategic
Leadership   Marketing
Potentially, executive communications is the most powerful PR tool your organization has. In rea...